Rare Suit is a Shingu shown only in the prequel series, Akame Ga Kill!: Zero. It takes the form of an armor. It's wielded by Guy.

Rare Suit, like all other Shingu, was created four hundred years before the start of the series by The Emperor of that time in an attempt to create weapons that could surpass the Teigu.

It was kept hidden in the Empire's secret storage until It was given to Guy by Gozuki. Its status is currently unknown after Guy was killed by Weneg inside the gravekeepers' tombe, which collapsed shortly afterward.

Rare Suit's ability is manipulating soil. It is unable to create soil out of nothing. Its biggest advantage is burrowing underground, which can be used to surprise attack unaware foes, however, using it puts great strain on the user's body.

Rhea suit back.png
The back of Rhea suit 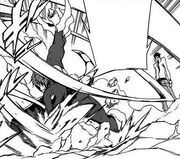 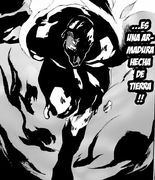 Stone Wall
Add a photo to this gallery

Retrieved from "https://agkofficial.fandom.com/wiki/Rare_Suit?oldid=2298"
Community content is available under CC-BY-SA unless otherwise noted.